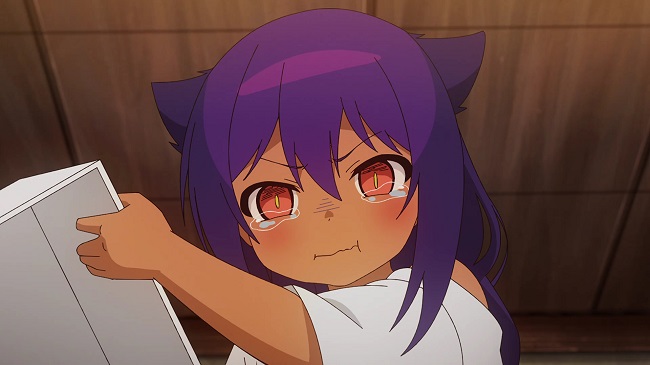 The Great Jahy Will Not Be Defeated! An anime in which demons and gods perform work in the human world has just appeared. There are both shonen and slice-of-life elements in the anime. For those of you who have seen or read the anime, there are other anime and manga based on this anime.

You should check them out next.

Dark Kingdom’s second in command, the Great Jahy, has a frightening and revered figure. Jahy, cast in a powerless state by an encounter with a magical girl, is transported to modern-day Japan after the Dark Realm falls due to the destruction of a valuable mana crystal.

In the midst of paying your rent and holding a job, resurrecting the Dark Kingdom from a cramped and crumbling apartment is no small undertaking.

For a long time, humans have polluted the ocean by dumping their trash and sullying the waters that a great many animals live in. These poisoned waters have caused the sea’s inhabitants great hardship. Eventually, a particular squid decides the humans have had enough and promises to punish them.

The squid-like creature with fearsome abilities, including the ability to spit ink, use bioluminescence at will, and even have hair tentacles, Ika Musume must rise from the depths of the ocean to avenge mankind. Eiko and Chizuru Aizawa run a restaurant called Lemon Beach House, where she appears.

Taking them on as an easy first step toward world dominance, she declares war on them immediately, only to realize she is literally out of her element! In an effort to demonstrate her superiority over the squid, she destroys a beach house wall and is obliged to become a waitress as a result.

After losing to the Aizawa sisters, Ika Musume finds herself stranded for the moment, unable to carry out her plans to dominate the world.

As soon as Ika Musume becomes the Lemon Beach House’s newest employee, regardless of these setbacks, she finds herself at ease. Funny and crazy, Shinryaku! On the surface, Ika Musume creates new memories and meets new people as she continues her new life.

The squid ink spaghetti she makes will be a weapon against the world, as Ika Musume looks to conquer it with new acquaintances!

There is no dividing line between humans & demons, nor between Assiah & Gehenna, the realms they inhabit. According to ghost stories, you can only travel between kingdoms by being possessed.

Unfortunately, Satan, the ruler of Gehenna, has not been able to find a suitable host, and therefore remains bound to Gehenna. A desperate attempt to defeat Assiah is made by sending his son in place of him in hopes that he will eventually be able to use his as a vessel.

The story follows Rin Okumura, a troubled teenager who appears to be an ordinary man until one day demons ambush him. After discovering that he is, in fact, the evil demon’s son, he is compelled to return to his demon’s father so that they may defeat Assiah together.

Rin refuses to join the king of Gehenna, and begins training in order to defend Assiah alongside Yukio while they are exorcists.

It makes powerful gods a comic relief, much like the great Jay will not be defeated. A top ranked isekai anime.

Having died a pathetic and laughable death on his way back home, Kazuma Satou now finds himself sitting in front of the goddess Aqua.

He is given the option of being reincarnated in a fantasy world or continuing in heaven as it is, and of course, like every other person he chooses the fantasy world. His fantasy world holds an array of horrors, such as defeating demons, which he does not realize.

However, this is the last thing he worries about, as he doesn’t expect to work to pay for his daily expenses in a fantasy world.

During his move to Constant Magic Academy, Akuto Sai becomes friends with a virtuous member of the ninja clan, Junko Hattori, in order to change the world for the better. When they set out for the academy, they promised to make the world a better place together.

However, as soon as he arrives at the academy, he is told he will become the Demon King!

Upon hearing of his fate, the school starts to fear him, and Junko loses trust in him. In his determination not to let his predicted future control his life, Akuto’s every word and thought only reinforces his destiny as the Demon King.

In addition, every single one of beautiful girls has a plan for him. From bringing him to justice, to showering him with love, each of their plans for him is unique. Newly empowered, Akuto must face the misfortunes he has faced and prove that there is hope that can be found in his fate.

There is no law or order at Ishiyama High, which is populated exclusively by criminals. There is, however, one universal rule: never cross Tatsumi Oga, the cruelest fighter in Ishiyama’s line of duty

Oga encounters a man floating downstream on a river bed one day. The man Oga retrieved split in half, revealing a baby that immediately formed a bond with him after crawling onto his back. The baby will be referred to as “Baby Beel”, the son of the Demon Lord Beelzebub, even though he hasn’t realized it yet.

Oga also faces off against Hildegard, Beel’s demonic maiden, to complete his quest to find the future Lord of the Underworld. While trying to raise Baby Beel together, they may have to face greater challenges than they can imagine, because they are surrounded by juvenile delinquents and demonic forces.

Despite the war between humans and demons escalating for fifteen years, the human world is still very much in a stalemate. He abandons his companions to continue his advance quickly towards the Demon Queen’s castle, displeased with his slow progress towards the Demon Realm.

As soon as the Hero arrives at the royal residence, the Demon Queen reveals herself to be not only a beautiful woman, but also a seeker of the Hero’s assistance. Discouraged by this turn of events, the hero refuses to cooperate with the enemy, claiming that war is being fought by demons and tearing the south apart.

Despite this, the Demon Queen argues that the war has not only brought humanity together, but also contributed to their prosperity and wealth, providing evidence to support her argument.

He then agrees to join the search for his ex-enemy with his now former enemy. As they set out for the human world, they made a promise to remain together through sickness and health.

The eastern district of Demon World is ruled by Staz Charlie Blood, a powerful vampire. Although rumors portray him as a ruthless and bloodthirsty monster, Staz is simply a Japanese otaku who has no interest in taking human life. Her days are spent lounging around, watching anime and playing video games, while her subordinates manage his territory.

Fuyumi was killed when an attack occurred on her territory just as he was beginning to feel a deeper attraction for her. After Staz loses her to death, she becomes a wandering ghost, and he vows to resurrect her in order to finally reach the human world, which he has always longed for.

It is the story of Staz, Fuyumi, Bell, and the half-werewolf on their quest to discover the magic that can restore life to humans as they approach their most dangerous moment: the end of the world.

A few of the elements of Noragami remind me of the great Jahy will not be defeated. There is, however, one major difference between the two: the demons have been replaced by gods.

There is no change in the remainder of the comedy or slice of life elements. In addition, the story takes place in modern-day Japan.

In Hiyori’s life, his life is transformed when he is saved from a fast-moving car. During the process of being saved, her soul would periodically slip away from her body. Yato must now return Hiyori to normal. Hiyori might be able to help him achieve his dream.

2. I Couldn’t Become a Hero, So I Reluctantly Decided to Get a Job

After turning down the opportunity to become a hero, Raúl has decided to join the workforce. The Magic Leon Shop is a store where he works with small electronic gadgets.

The worldly life of this man is going well until a particular person appears! He turns out to be a new co-worker! He isn’t your typical co-worker.

The daughter of the Demon King, Fino Bloodstone! Will an aspiring hero and an aspiring demon lord team up? There are mysterious whims to life and destiny, so he might sound crazy.

This show/manga is the closest to the great Jahy will not be defeated by far. Both anime share a similar setting and character structure. Ultimately, both anime revolve around Demon lords rebuilding their armies by working a part-time job in modern-day Japan.

As Alciel, Lucifer, Malacoda & Adramelech, Satan’s demon generals, seek to annex the continents of Ente Isla, he aims to conquer it. Following their killing of Malacoda and Adramelech by the hero Emilia and her companions, Satan and Alciel escape Ente Isla through a door that leads to modern-day Tokyo, Japan.

Satan and Alciel, however, undergo transformations that reflect what they would appear like if they had been human.

In the modern world, magic no longer exists, so they become creatures that are human. The Satan is employed by MgRonald’s, whose servant is Alciel, and he works part-time to survive. A girl named Emi Yusa, who claims to know Satan, shows up one day and approaches him, pretending to be Emilia.