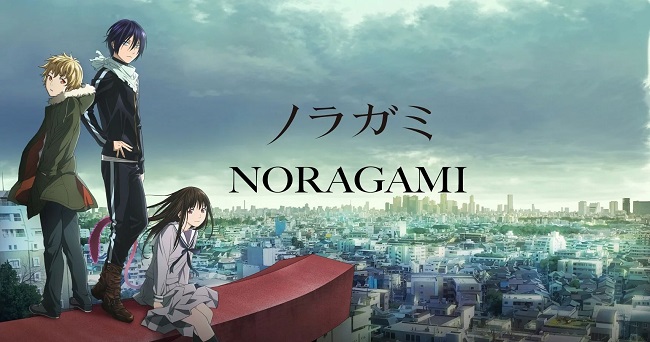 Based on a manga series with the same name by author Adachitoka, Noragami is an awesome Supernatural anime. As Noragami has 2 seasons and a good fan base, we decided to compile a list of anime and manga that are similar to Noragami for its fans to watch instead of waiting for the third season.

After he was saved from a car by a girl named Hiyori, his life changed forever. Meanwhile, she survives but, in the process, some fault occurs due to which occasionally her soul detaches from her body.

It is now Hiyori’s demand that Yato turn her normal again. He agrees in the hope that as long as Hiyori helped him, he could achieve his dream.

Do not be fooled by the name, this isn’t toilet humor. There are urban legends, folklore everywhere; this one folklore is popular at Kamome academy, it’s about Hanako-san.

Several daring students attempt to contact Hanako-san without any success. Suddenly one day Hanako was summoned by Nene Yashiro and now she finds herself stuck in a supernatural world as Hanako-san’s assistant.

Hanako-kun, too, deals with young teens and supernatural phenomena, like Noragami. There are dark undertones in both, and the characters and story are very mysterious as well. Whether you liked Noragami or not, it is a must-see regardless.

Originally introduced in 1996, this manga series has been around for quite some time. Hence, there are plenty of adventures. An anime based on the Monster Hunter franchise set in the 16th century in Japan.

Kagome Higurashi, a high school student from the modern day, falls into an intriguing well and leaps into the past.

It is a story with several world elements, and Kagome is the candle of hope in a world devastated by war, controlled by Demons.

To defeat the malicious abyss, she, Inuyasha, and other heroes form a gang and do everything possible to overcome this hurdle. It is closer to Noragami due to the Supernatural aspect around the whole series.

Staz Charlie Blood reigns over the Eastern district of the demon world as a powerful vampire. Although Staz is rumored to be a bloodthirsty and ruthless monster, in reality he is just a devoted fan of Japanese culture and not interested in human blood.

He leaves the management of his territory to his subordinates, so he can spend his days playing games and watching anime.

A Japanese girl, Fuyumi Yanagi, turns up in Staz’s world accidentally by falling through a portal into the demon realm, something which overjoys him.

However, as soon as he begins to feel an unusual attraction to her, her territory is seized, resulting in Fuyumi’s tragic demise. As a result, she is now a wandering ghost, and crestfallen Staz vows to resurrect her in order to achieve what he always dreamed of: to visit the human world.

As they search for the magic that can bring back humans to life, the characters of Blood Lad are joined by Bell, the space wizard, and the half werewolf.

The Soul Eater series follows students attending Shibusen, a school for budding demon hunters. Maka, a scythe, and Soul, his partner who turns into a scythe for her use, are central characters of the story.

In an effort to fight together, each Hunter is paired with a weapon who can amplify his or her abilities. As with Noragami, Soul Eater has a Supernatural element, as well as action fighting.

Among the other characters are Death the Kid, and his weapons Liz and Patty that turn into twin pistols, and Black Star, together with his partner Tsubaki, whose ability to switch into multiple weapons like a multi-tool. Both the students and their teachers struggle against the witches and demons that are trying to take over the world and Shibusen with no consequences.

As a result of her pleas, Mirai suddenly stabs Akihito with a sword made from his own blood, only to find that Akihito is the offspring of a Supernatural creature called a Youmu and a human being.

The lives of Akihito and Mirai change, when they get to know that Mirai is a warrior and the last from spirit clan from the spirit world (Ikaishi), and now Akihito helps Mirai gain the confidence to kill Youmu in order to prevent her from killing him for practice.

5. The Devil is a Part-Timer

Satan, aided by Alciel, Lucifer, Malacoda, and Adramelech, is trying to conquer all of Ente Isla by annexing its four continents. When satan and Alciel are confronted by the hero Emilia and her companions, after killing Malacoda and Adramelech, they escape the world of Ente Isla through a door to modern Tokyo, Japan.

Nevertheless, because magic does not exist in the modern world, both Satan and Alciel transform into forms that resemble how they would appear if they were humans. Satan works part-time at MgRonald’s to survive, while Alciel serves him.

He meets a girl who bears the name Emi Yusa, a character who is actually Emilia in her human form. Following the introduction of each character, the story explores their personalities and their moral values. There are also more Ente Isla characters introduced later, who face the dilemmas of the new world in comic fashion.

A teenager discovers he and his twin brother Yukio were born to a human mother, and that he was the heir to the powers of Satan. When Satan kills his Guardian, Rin seeks his brother’s tutelage in order to beat his father, Satan, and therefore, enrolls in True Cross Academy to become an exorcist.

Noragami and the Blue Exorcist are similar in many aspects, from the supernatural and action to the demons and devils involved. Watching it gives you a Noragami vibe.

The legendary and feared demon, Ryoumen Sukuna, has broken up into fragments and his fingers have been scattered around the world, marking as a special-grade cursed object. A demon that consumes the body parts of Sukuna might gain too much Power and destroy our whole world.

There is, however, a mysterious school of magic that protects the living from undead.

A high school student named Yuuji Itadori spends his days visiting his ill grandfather. While he looks like an average teenager, his physical strength is amazing!

Even though all the sports clubs want him to join them, Itadori prefers to mingle with the school outcasts as the Occult Club, but they have no clue the terror they will unleash upon breaking the seal….

2. In many ways, Jujutsu Kaisen’s cursed spirits are similar to Noragami’s phantoms.

3. Instead of sorcerers, Noragami has gods (deities).

As a result of her father’s poor financial decisions, Nanami Momozono becomes homeless. She takes refuge in an old shrine, but soon finds out that she must act as the goddess that guards that sanctuary.

As she accepts her job, she grows closer to Tomoe, the fox at the sanctuary. Nanami’s quest for knowledge of the spirit world shows many similarities to Hiyori’s as she learns about Yato and the other gods, and becomes involved in their world.

1. These stories are both set in a modern-day fantasy world. Gods, shrines, etc., are the main theme.

2. In both stories, the main character meets a supernatural guy with powers.

3. Both stories are humorous and full of action.

Based on Tite Kubo’s manga of the same name, Bleach is a well-known anime. Also, part of the big-3, the anime is made by Studio Pierrot. Bleach is an anime about sword fighting with supernatural themes. Bleach and Noragami have striking similarities.

Ichigo Kurosaki is a typical high school student. One day, he discovers that his family has been attacked by a Hollow, an evil spirit. Rukia Kuchiki, a soul reaper, comes to protect his family and is injured i n the process. In order to keep his family safe, he accepts Rukia’s offer and becomes the soul reaper himself. Ichigo takes on the task of hunting hollows in lieu of Rukia, who is unable to regain her powers.

1. In Bleach, the concept of souls is very similar to Noragami, except Zanpakutos are replaced by Regalia spreits

2. Phantoms in Noragami are similar to the hollows in bleach.

3. In Noragami, soul reapers are just replaced by gods (deities).