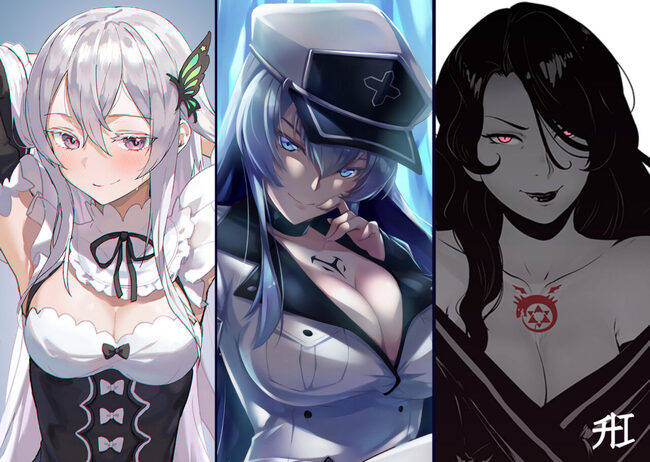 A weeb’s heart belongs to an anime character. Their motivation far outweighs that of motivational speakers. We tend to like heroes as kids, but become relatable to villains as we age. It is often the villain’s tragic backstory that justifies his or her actions.

Furthermore, some villains are more wonderfully developed than others. Some of the best fight scenes and stories come from evil villains. In some cases, they even shape the storyline for the whole series.

The anime My Hero Academia features her as a villain. A major antagonist, she is a member of the League of Villains. During Forest training, Provisional licensing, and Shie Hassaikai Arcs, she was the main antagonist.

She can turn into any person by injecting herself with their blood via her Quirk. Even mimicking the voice, she is capable of transforming perfectly. She remains transformed longer when she injects more blood.

Himiko Toga is a petite girl with pale skin who always smiles and blushes. While she is a cheerful, happy girl, she flashes a smile even when she is killing someone, demonstrating a sadistic personality. In her battle against Tsuyu and Uraraka, she displayed that she is an unstable, mentally ill girl.

It is difficult for her to adjust to the prevailing society, as it is for other villains. Her fascination with Stain turns into a desire to kill and, later on, she becomes him.

In the anime series Re: Zero, she is known as the Witch of Greed. As a secondary antagonist, she was introduced in Arc 4 with numerous references before becoming a supporting character throughout the series.

A tea party where Subaru was invited by Echidna was the first time Subaru met her and finds her to be an uncorrupt, polite, childish woman. But she is a black-hearted, greedy woman, lacking any sentiment. Her temper flared up when Subaru began returning without asking.

Echidna is depicted as a tall maiden with long, white hair. Her curiosity about everything makes her the Witch of Greed. In the course of looking at his ‘Return by Death’, she offers Subaru her hand in a contract where she becomes his advisor on various occasions concerning the ‘Return by Death’.

She is described as quite careless by the other witches, especially after incinerating the forest, just to warm herself. In retaliation for declining Subaru’s contract, she denied his eligibility for her Castle of Dreams. It is only Emilia and Satella to whom she shows resentment and hatred in the anime.

Elfen Lied’s Kaede plays both the protagonist and anti-hero in her mad form, Lucy. Also known as Queen Diclonius, she is an evolution of the human race. As a result of dissociative identity disorder, Kaede has three separate personalities: Kaede/Lucy, Nyu, and DNA voice.

Originally, Kaede appears a timid, frustrated, and depressed kid. Due to her horns, she has always faced discrimination. She has been bullied even in the orphanage because of her horns.

As a result of her dog being murdered in front of her by the orphanage children, she developed a hatred and anger towards humans. She would kill the whole family just so she could use their house. It is not a question of guilt or regret for her.

In the anime Tokyo Ghoul, Rise Kamishiro is the first antagonist. She was the ghoul known as Binge Eater.

Her Kakuhou was later transplanted into Ken Kaneki, making him a one-eyed ghoul after she died in a steel beam incident. Dr. Akihiro Kanou captured her alive and used the Kakuhou to turn more one-eyed ghouls.

She is described as a slender girl with chest-length hair. She tricks humans and feasts on people later, as a ghoul. She was an illegitimate child of Tsuneyoshi Washuu, CCG’s chairman.

From there she escaped and came to Tokyo, leaving the organization V. Having been used to produce more one-eyed ghouls, she was used as a host for Dragon, indirectly causing the tragedy in Tokyo. Ken Kaneki later relieved her of her suffering.

In the anime series Danganronpa, she is a student at Hope’s Peak Academy’s Class 78th and part of Killing School Life. She holds the title of Ultimate Fashionista.

Due to its success, Danganronpa was originally released as a video game, but several spin-offs were created, notably an anime adaptation and Danganronpa/Zero, a series of two novels.

As the founder of Ultimate Despair, she is called the Ultimate Fashionista. Junko has a secret talent, called Ultimate Analyst.

With her charisma and taste, she has taken the country by storm. Despite her popularity due to being “not fake”, she is a deranged, sadistic, and ruthless creature who cares nothing more than to create sorrow and despair for those around her.

As Ryoko Otonashi, she also possesses the skills of an Ultimate Analyst, both of which she has as an alternate personality.

The Female Titan, known as Annie Leonhart, played a major antagonist role in Attack on Titan’s early stages. She penetrated Paradis with Reiner, Bertolt, and Maurice to recover the founding Titan for Marley, residing in the walls.

Various deaths, including one of Levi’s squad, were the result of her actions during the Female Titan arc.

She is an Eldian who lives in Marley. The mission to retrieve the Founding Titan from the walls was given to her along with Reiner, Bertolt, and Maurice.

Her strict upbringing left her an isolated, timid, and cold-hearted child. Although Annie appears emotionless, she does feel some guilt after interacting with a corpse after the Battle of Trost and was reluctant to eliminate Marco when he learned about their identities.

There is a little girl inside this warrior who just wanted to finish her mission and return to her father. She would be seen with teary eyes whenever she failed to capture Eren or was unable to escape, failing to return back home.

In season one of The Promised Neverland, Isabella is the main antagonist. Isabella is the matriarch of the orphanage that cares for the orphans. Initially, it seems like she is a caring, compassionate mother who loves her children, but in reality, she is a wicked lady with no love for the children.

Having broken Emma’s leg in order to prevent her from fleeing, Isabella is shown to be cold-blooded.

As a child, Isabella was also an orphan. One year after she was born, she was sent to the “orphanage”. In grief and melancholy after losing her one and only friend after his shipment, she climbed the giant wall to flee from the orphanage.

When she arrived on the other side, this dream was dashed when she saw the huge cliff. She had to go back to her mama. The day Emma, Ray, and 13 other orphans escaped from Grace Field House, she accepted her fall and watched her children depart, saying farewell to them.

2003’s Full Metal Alchemist featured only Lust as a female antagonist. As a Homunculus, she had many abilities including regeneration. Her father’s lust was embodied in her and was used as a means to lure and trick others.

A sadistic character, she enjoys torturing others. In most cases, she is partnered with gluttony, a special friend.

Only Lust exhibited no personality traits according to her name. Greed was greedy, and gluttony was always hungry, but Lust was neither prurient nor had any attraction to others.

According to her father’s plan, however, she did seduce and flirt with others in an attempt to lure them in. “I look forward to the day when those eyes will be wide with agony,” she said, accurately predicting what Mustang would experience after opening the gate of truth.

The anime Akame ga Kill featured her as a major antagonist. Her position in the Empire was that of general. She was commissioned to lead the Jaegers by the Prime Minister as Night Raid became an increasingly effective assassination team.

Though she was a vicious adversary, as a superior, she was the most caring and loving leader.

Fighting is what Esdeath did for a living. Those she deemed to be deserving held high esteem in her eyes. Having lived under her father’s saying, “the strong survive and the weak die”, she was a sadistic woman. As an act of love and devotion, she fed Tatsumi one of her specialties, even after he rejected her.

For Tatsumi’s sake, she wanted him to accompany her as a subordinate. When he refused her offer, she said she would murder him if he couldn’t be hers so that he couldn’t be anyone else’s.

Soul Eater featured the antagonist Medusa, also known as Dr. Medusa. The snake witch was interested in the black blood and wished to have the Kinshin resurrected. Her hand-to-hand combat style was quite proficient even though she was a woman. A great observer, she was very smart and able to adapt quickly to new situations.

Her daughter, Crona, was a crucial part of a plan to overthrow the prevailing world order so that it can be restored back on track. The middle child of the Gorgon sisters, she is the second of three children.

As a result of her lack of compassion, she regards others as specimens or tools for her own benefit. Even more so than Asura, Medusa has proven to be the evilest character in the series.

The only thing capable of killing her is Maka’s Majin Hunt technique, a technique that erases all evil. Medusa is pure Evil in the series.

There are times when the show is carried by its antagonist, either because they are the fans’ favorite or because they dominate the popularity polls.

Many anime villains had such a captivating backstory that their actions were justified. We have some of our most tragic deaths and some of the greatest fight scenes from these female villains.