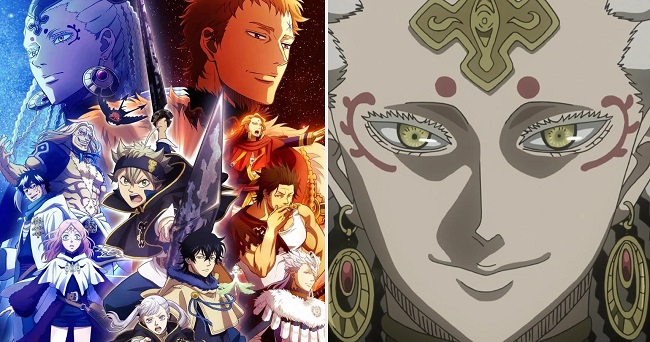 What comes to your mind upon hearing the word ‘Black Clover’? It reminds me of ‘companionship’ and ‘determination’. The friendship of Asta and Yuno to their rivalry, from great fights to very intense emotions, this anime provides a plethora of expressions to its audience.

It also consists of several characters, some despised while some liked, each leaving an impression on you. The series captures one and transports them into the universe created by the artists, beginning an adventurous journey.

Many characters appear in the show, and they all have great skills, but some of them are more powerful than the others. This means either they have good strategies or they possess powerful ‘magic’.

The following list discusses each person’s overall strength- both mental and physical. Listed below are the top 10 most powerful characters from the Black Clover Manga.

She might seem clumsy in the beginning, but she is one of the most powerful characters in the game due to her large pool of Mana. Even Mimosa acknowledged her abilities when he said she was probably capable of leading Golden Dawn.

However, despite her huge mana, she needs to work on her combating skills more and better the offensive battle tactic.

Rightly so, she is the ruler of the kingdom of Hearts. In addition, she can summon the water spirit Undine using her water magic. Her magical powers are complemented by the knowledge she has inherited from black clover, making her a relatively intelligent character from that world.

He is known as the epitome of evil and is also a sadist who plays with humans and elves. He orchestrates massacres of elves and reincarnates them. He is typically dressed in a black robe and has a dark aura around him. He is not only highly intelligent, but also very powerful.

He is overconfident of his abilities, leading to his doom. We all know how difficult it must have been to eliminate him. He was one of the dark triad and was at 80%.

The third member of the dark triad, Vanica, is possessed by the demon Megicula. When necessary she can access 75% of her master’s strength. She possesses superhuman strength and is one of the strongest wizards of Black Clover. Her cheery personality makes her a likeable character, even after being a part of the Dark Triad.

Having enough strength to take down a devil, she possesses the most powerful devil, Megicula. Her power of resurrection is a unique and amazing skill.

As the current Wizard King, he is one of the strongest characters who is not only great with battle tactics but also possesses great magic prowess.

He also has unbelievable speed and is wonderfully gifted with a rare grimoire. His ability to manipulate the flow of time, makes him even more powerful and even lets him come back from the dead.

He has a fun and compassionate character even after being extremely powerful. The only reason he is not in the top ranks in this list is the result of him returning back to his 18 year old self who wasn’t as mighty as in his prime.

Nacht, being a secret agent in the Kingdom of Spades, infiltrated the Dark Triad. He is a handsome but rude person who has no regard for others emotions. He possesses spatial and shadow magic, making him capable to travel through portals.

As a member of Black Bulls, he has a large reserve of powers and high physical endurance. Each mid-ranking devil he possesses, contributes to his strength name- Slotos, Gimodelo, Plumede, and Walgner.

The creator of swords, Licht, is the original holder of Asta’s grimoire, also being a great swordsman able to imbibe huge amounts of mana.

There are powers that Asta isn’t capable or even doesn’t know about which Licht has control over. He has immense magical powers extracted from the Elve’s magic and far surpasses Lumiere’s prowess.

Another member of the Dark Triad, he is an extremely dangerous person from the Spade Kingdom. He even looks like a devil while using his Devil magic.

A merciless and bloodthirsty being, he can manipulate bones and make swords with them, making it difficult for the rival to evade. He easily overpowered Yuno while he was at his 55%, and now, can use 80% which makes it nearly impossible to conquer him.

As the first Wizard King, he’s the most deserving character to be a part of this list.. An ancestor of the three royal bloodlines, he’s the Magic Emperor of Clover Kingdom’s Knight Squad.

His ability to manipulate light allows him to travel large expanses of land and modify light rays to form an arrow as fighting tactics. His magic is portrayed to be ‘quiet’ and serene. He had a strong resolution to defeat Zagred.

The main protagonist of the anime, Asta is obviously among the most powerful characters of the show. In Spite of not having any innate powers, he possesses a devil, who is namely the Anti-magic devil, allowing him to nullify any kind of magic and erase its existence.

He also owns the three powerful magic swords and is fully capable to become the new Wizard King.

As the Leader of the Dark Triad, Dante is the main antagonist of Black Clover, who exhibits a sadistic and evil personality. He is very intelligent and lives by the motto- Malice makes humans Stronger.

He is capable of controlling the cells of his body, regenerating them, and stretching his body to the point that it breaks and even then, the pieces join back making it impossible for him to die (yet).

Dante is quite skilled in hand-to-hand combat and can create Squads with rocks. He is the ultimate powerful character in Black Clover till now.

Everyone has their most beloved character, the one whom we think to be the mightiest of all. This list consists of my personal favorites. What about you, which characters do you prefer?

Let us know in the comments below and the reason why the character should be a part of this list.