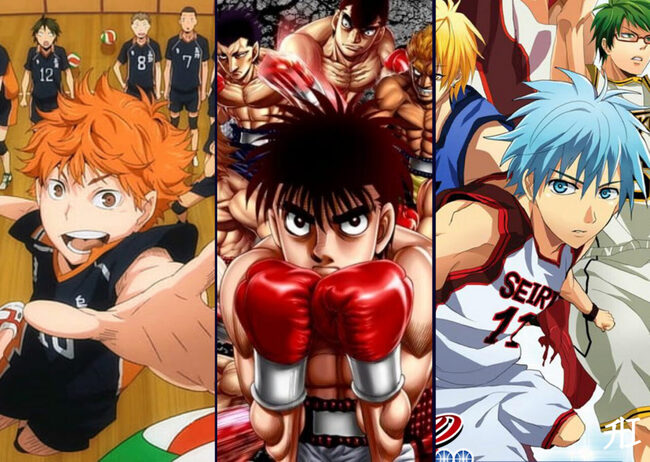 Sports and anime are two of the things that bind people together the most. Throughout the world, people bond over the same anime or their favorite sports person.

Aside from the cute characters and the enhanced drama of anime, there is an added element of excitement and intrigue as well as a great deal of entertainment. Here are the top 10 anime based on sports that you should definitely add to your watch list.

When you’ve lost your favorite game and started projecting your frustration and grief onto others, do you ever feel as though they are emotionally stressed? Nagisa Aragaki, our protagonist, felt this way after she failed to win her National Junior Badminton tournament. This is her story.

The story is about Nagisa, a girl who has to face her insecurities, help others around her, heal her rival’s troubled heart, and win a national competition.

No doubt, anime is overly dramatic, but if you like it then you won’t have any problems. A character’s conflict is what impresses the viewers most, especially the main character.

The animation pace is slow and will require some getting used to. The anime is overly dramatic, but if you’re interested in Badminton, it is quite realistic.

Have you ever thought that watching ice skating could be interesting? Even if it wasn’t interesting before, this anime will surely make it interesting.

As an athlete, you experience self-doubt and anxiety on a regular basis. This is the story of Yuri, who idolizes Victor Nikiforov, who is a former world champion and now a coach.

It’s about pleasing his idol Victor so that he can skate with him and be trained by him.

As well as showing the athletic aspect of the anime, this series demonstrates how people have some level of inferiority complex and constantly question their abilities.

As a man, Yuri has problems with his body image, his self-worth, and his capability. Because he’s not a prodigy, he has to put in a lot of work to be the best.

Although not at the forefront, this anime has some BL undertones. Finding one’s self-worth and carving one’s niche in sports can be a very beautiful journey for a young man.

Onoda Sakamichi, the main character in Yowamushi Pedal, knows exactly what it is like to be an Otaku, and he does it with a smile. A typical manga main character, Onoda doesn’t have many friends, he doesn’t have a great look, and he’s the biggest otaku that exists.

Why does this anime feature this highly unlikely character? As he commutes with his bicycle regularly to Akihabara, he doesn’t realize that by today, he has already mastered it, now he just needs a little push.

In addition to anime and manga, Onoda loves cycling so much he will suffer through the pain of cycling and feel the wind push him while riding. Even if you don’t know anything about cycling as a sport, basic terminology is conveyed in the anime for different characters.

With the exception of Onoda, everybody has some degree of athletic ability, but Onoda is a very unlikely prodigy. This is a very moving story about a young underdog and his rise, his relationship with his rivals, and the characters’ creativity.

As the story of Ace of Diamonds begins, Eijun Sawamura is devastated by his defeat and resolves to play nationally once he is in High School. Baseball is the basis of this anime, and it takes us on a journey that is full of perseverance and hard work.

At the new school, Eijun, who was considered to be a good baseball player, is surrounded by elite players. Among many different Elite players, he must now find his niche and follow his dream. In this anime, players’ psychology and in-game tension are thoroughly represented.

In addition, there are times when it is hilarious; this does not detract from the flow of the show rather it extends it. Besides the main character, the show has more than twenty characters and most of them have their own characteristics, storyline, and moment of glory.

The anime does baseball well, so if you want something simple and fun then this anime is for you.

6. Welcome to the Ballroom

People can sometimes be found in the most unlikely circumstances. Kaname Sengoku is bullied at the same time Tatara Fujita finds him. A normally aimless kid finds his passion and becomes the best ballroom dancer, in the most amazing anime on this list.

Every frame is art in itself. There are two parallel storylines of two very different characters in this anime. Tatara is an insecure pushover while Chinatsu Hiyama is an ambitious individual.

However, sometimes the dancing part of the anime becomes the undertone because the drama dominates it. You should watch this anime if you are looking for something enjoyable and pleasing to the eye.

You’ll be taken into a basketball world unlike any other through one of the most magical animes ever created. As the name implies, basketball is at the core of the anime, and one aspect in particular that will definitely impress anyone is the music, which has an old-school hip-hop vibe to it and a retro feel.

As the sixth member of ‘Generation of Miracles,’ Kuroko rose to distinction and destroyed every other team before joining a new high school. While it may sometimes feel unrealistic, anime are usually like that; this is their unique appeal.

“Generation of Miracles” lives up to the name given to them even those who don’t care for basketball after watching this anime you likely will be. How does this anime differ from others?

In this story, the competing characters are actually friends of the main character, thus the dynamic between them is intriguing. If you’re looking for that adrenaline rush then definitely watch if you want overhyped characters and unrealistic parts.

4. Run with the Wind

The beautiful anime Run with the Wind makes you think about what you want to accomplish, what you hope for, and what life has to offer. The anime portrays the story of not just one, not two but ten different students and how each of them overcomes their own odds to achieve what one of them so deeply believed in.

I found it to be a heartwarming story about friendship and having faith in each other, supporting and encouraging each other. The story revolves around Haiji and Kakeru, who dream of participating in the legendary Hakone Ekiden relay race.

Characters have been carefully designed. There are reasons why they wear the clothes they wear and act as they do. The characters are very well placed and designed. The anime portrays the message to let go and start doing what makes us happy and run with the wind, rather than stressing out over small issues.

Animes are good at showing how a character overcomes internal conflicts. This anime is about a girl who grew up under the shadows of her elder sister and had no dreams of her own, but everything changed when she met Arata, a new exchange student.

An introduction to Karuta, a card game inspired by the Classic Japanese Anthology of Hundred Poets, is given to Ayase by Arata. In addition to being a mind game, it is also physically demanding. This anime excels at character development and plot development.

A character in the story will reach out to you on a different level. You will understand how they feel and what they want to accomplish.

The anime portrays perfectly that until and unless you have determination, no matter how much passion you have for something, you will always lose to more talented people. A lot of the story is straightforward and this anime is based on characters for its flow.

The most popular sports anime on the planet, Haikyuu, needs no introduction. To anyone interested in exploring the sports anime genre, Haikyuu is the best gateway anime. Although it does not have as many episodes as Naruto or One Piece, you can still count it as long as 85 episodes.

Volleyball is the basis of Haikyuu, so if you are wondering how an activity like volleyball can be entertaining, you should give it a try. This anime will provide the viewers with a wholehearted experience even if they are not into sports.

It’s an anime that makes you feel good and cheer for not just the main characters, but also the side characters as well. It does a good job of portraying the character arcs. Anime stories tend to follow typical tropes, especially explaining each and every step their characters take.

This gets quite repetitive, but if you don’t mind this then it’s a great story.

The sport of boxing is already highly interesting so who would want to miss an anime that is based on this sport? Boxing matches have just the right amount of tension, drama, and intensity in this anime. With this anime you will fall in love with the characters, you will root, laugh, and care for them.

There are even beautiful, wonderful backstories of Ippo’s opponents, which are absent in many sports animes. Keep a tight grip on your seat as this is sure to get you shouting, holding your breath, and on the edge of your seat.

In the training montages, you see how much the main character wants to excel despite the struggles he faces.

Characters and story plots are never dull, making the anime so much more enjoyable and interesting. As you can see, being an athlete isn’t just an easy ride. You have to make sure you follow a schedule and have discipline even after you’ve lost your breath.

It’s hard to believe when it ends as the makers of this show know how to hook viewers. Considering the genre, it is a great anime with a small problem: the music isn’t the best.

Comment and let us know what you think. Did you see any of them, and which one was your favorite?