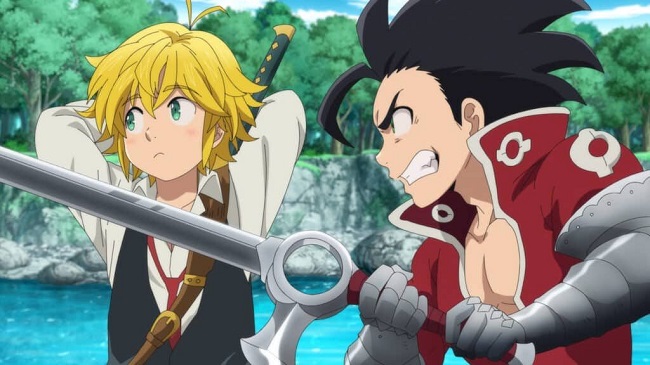 After the end of holy war 1, it was understood by fans that it was the end of Seven Deadly Sins but seems like the story isn’t over yet. Turns out that protecting fragile peace is harder than achieving it.

The Seven Deadly Sins: Cursed By Light is the new anime film that brings back our disorganized heroes who risk their lives yet again to fight a foe who threatens fragile peace. Therefore, brace yourself as our heroes come back on their last adventure.

The trailer for the new movie for Seven Deadly Sins: Cursed By Light announced that the movie would premiere worldwide on Netflix on October 1, 2021.

The trailer begins with Meliodas and Elizabeth spending time together and later join the long-anticipated wedding of King and Diane.

Everything is on track till Dahlia, the second fairy king and Dabuzu, a master craftsman giant arrive to stir up trouble in the kingdom. The sins and their allies are later seen fighting off this threat and the trailer ends with Meliodas and Zeldris collaborating to launch their final attack.

The film’s story picks up right after the events of the final season. This would be a good time for everyone to catch up on the series and for veteran fans to be excited about this movie’s arrival.

Seven Deadly Sins is a Japanese fantasy manga and anime series penned and illustrated by Nakaba Suzuki. It was serialized in Kodansha’s Weekly Shōnen Magazine from October 2012 to March 2020. The chapters are collected into forty-one tankōbon volumes.

The princess of Liones Kingdom, Elizabeth Liones, goes on a journey to find the most dangerous criminals which are the Seven Deadly Sins. They are Meliodas(Dragon’ sin of Wrath), Ban (Fox’ sin of Greed), Dianne (Serpent’s sin of Envy), Merlin (Boar’s sin of Gluttony), Escanor (Lion’ sin of Pride), Gowther (Goat’s sin of Lust) and King (Grizzly’ sin of Sloth).

The sins were banished from the Liones kingdom 10 years ago because they were wrongly framed for the murder of the Great Holy Knight, Zaratars. In the present situation, the kingdom is in danger of falling into the corrupt hands of Holy Knights, therefore Elizabeth must find the seven deadly sins to save the Kingdom.