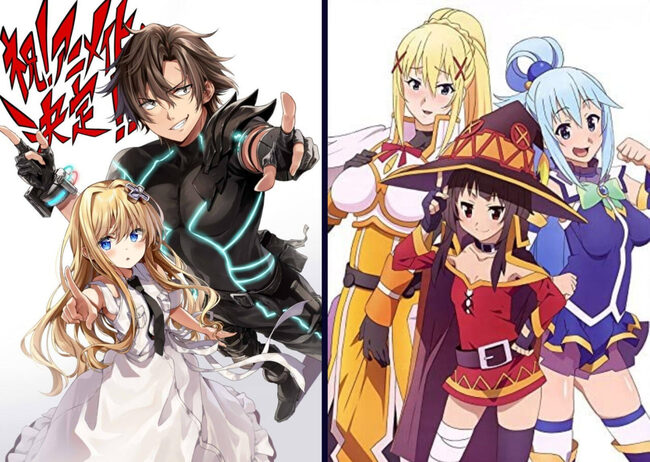 The anime Combatants Will Be Dispatched has a wonderful, silly tone that just brings a smile to your face. When you don’t feel like watching complex and intense anime, anime like this becomes your go-to. You’ll laugh at some point or another because it’s quirky and filled with dad jokes.

There are also some isekai elements to increase its appeal.

Some relate more to the plot or characters of a given anime/manga than the feeling we are given when watching Combatants Will Be Dispatched.

The story of Heavy Object is about Qwenther and Havia, who discover the weaknesses of different ‘Objects’- giant balls that are impermeable can survive atomic attacks and can cause major damage.

In order to enable their kingdom to succeed in the war, Qwenther and Havia go on a quest for weak points of various ‘objects’. The plot is not very different from Combatants Will Be Dispatched, as both stories are about two partners who have to fight their way to fulfill their duty.

While both of these anime are about war, Combatants will be Dispatched centres around fighting demons, and Heavy Objects centers around dealing with weapons.

9. You Are Being Summoned, Azazel

Akutabe is a detective whose powers allow him to summon devils when necessary; when he summons Azazel-san, a lowly devil, for some reason he exploits him. The tone of the stories You are being summoned, Azazel, and Combatants will be Dispatched is similar.

Both of them have a demon aspect to them and they are mainly comics. There is more darkness and offensive humor in You are being summoned, Azazel than its counterpart.

Their themes and voices are very similar and they both aim to make you laugh. Azazel doesn’t follow a plot. It is more about characters and fun circumstances. It is well written, it has a natural flow, and it is easy to relate to the characters.

It has beautiful animation as well. Overall, if you enjoyed Combatants will be Dispatched, you are likely to like this as well.

8. Cautious Hero: The Hero Is Overpowered but Overly Cautious

Cautious Hero will make you feel like Combatants will be dispatched while watching it. Their tone is similar, as well as a few characters. There is a similarity in how both the main characters in both anime are quite powerful as long as they are in danger, but cannot be depended on to save others.

In addition, they are both accompanying a little girl on their journey. There are also elements of isekai like Combatants will be Dispatched in it that will tickle your funny bone.

Although the anime has good animation, it’s the sound design and the songs that stand out.

The anime also has a great design and development of characters that make you care about them and root for them. Although it has comic undertones, it offers a completely different experience from Combatants.

The isekai presented here is one of the most unique that I have encountered. Suddenly, in Tokyo, a large gate appears and creatures from the “special region” begin attacking people there, bringing about a task force whose mandate is to enter the gate and investigate the creatures and the portal.

Following Youji Itami, a member of the special task force, we see how her story unfolds. The comical tone and the fan service element in Combatants will be Dispatched are less similar.

In both stories the main characters are teleported to another world and must fight a war for their country; both have elements of adventure and military combat. You should surely keep your eye on this isekai.

6. The Rising of The Shield Hero

To protect Melromarc from the waves of catastrophe, the Four Cardinal Heroes are summoned to the kingdom of Melromarc. For fighting these waves, they are equipped with swords, spears, bows, and shields.

A major plot point of the anime revolves around Naofumi Iwatani, who is the shield hero and the weakest of all the heroes. He also is a newcomer to the world and knows nothing.

The journey into becoming who he was destined to be is a test of his worth. A protagonist who is not superpowered makes this isekai even more relevant to Combatants will be Dispatched.

Though both of them have very different tones and circumstances, they are both quite good isekai anime.

In No Game, No Life, two pro gamers, Sora and Shiro, accept an E-mail that transports them to another world. The world of this game is filled with everything, from small squabbles to large-scale wars, not through guns and machines but through highly staked games.

After finding new meaning in their lives, the siblings envision uniting all sixteen races of Disboard, defeating Tet, the God, and becoming gods of this new world.

The anime has a lot of comedy just like Combatants Will be Dispatched, its main characters actually lead their nation’s fight and win; both anime have a sidekick that is a little girl. There’s no fanservice in this show, so if you don’t mind it, this is the show for you.

The Re:Zero Isekai, in my opinion, is one of the best. There are not many isekai anime where Re:Zero is trying so many different things. The main character is thrown into an imaginary world with checkpoints, and if he dies before reaching the checkpoints, he has to restart at the previous checkpoint.

There are elements of simplicity yet complexity to the story, showing how little things can affect the whole outcome.

We want the main character to be a good character because the show keeps you on the edge of your seat. Also, Subaru dives into a world that is very mysterious in order to uncover its secrets.

This anime explores many aspects in such a way that it is very good at doing so. While Combatants Will be Dispatched is more light-hearted, Re:Zero is darker, but definitely worth watching.

This anime has a high entertainment factor. Throughout the anime, you won’t be bored even for a moment, and it’s certainly not repetitive. It is the story of three high school boys who somehow have very interesting high school lives, from enacting a favorite game to having a romantic encounter.

They share quite a bit in terms of tone, both having a great sense of humor and being very interesting. They both follow an episodic storyline, where the protagonist faces a new conflict in each episode.

It is impressively funny and engaging from start to finish. There is a slice of life aspect to it since it’s about childhood friendships. Those seeking something fun and easy to follow should watch this.

2. The Disastrous Life of Saiki K.

X-ray vision and telepathy are just two of the supernatural abilities Kusuo Saiki possesses in this anime. His powers are kept a secret, and he tries not to use them unnecessarily, leading a normal, unassuming life as much as possible.

He always ends up catching everyone’s attention, which then leads to hilarious events and makes for a very entertaining animated series.

We have a character-driven story instead of a plot-driven story. Our main character is not very active throughout the anime, things just happen to him and then he has to deal with the consequences. I really enjoyed this anime. Like Combatants will be Dispatched, it is a comedy with a supernatural theme. Funny characters make this comedy hilarious, and you will laugh and have fun.

Combatants will be Dispatched is the brainchild of the author of Konosuba, so there are many similarities between the two. The protagonist dies a pathetic and laughing death while heading back to his homeland and gets reincarnated in a fantasy world.

However, he does not know the horrors awaiting him in that fantasy world, including defeating demons.

The problem is far from his worries. What he doesn’t expect in his fantasy world is to work to pay the bills. That’s just the beginning of his misfortunes.

Each of them has a similar vibe, and the main character is transported to a different world in both of them. I like both the animation and the sound design very much. Overall, the show is enjoyable, good and it leaves a good feeling when watching it.