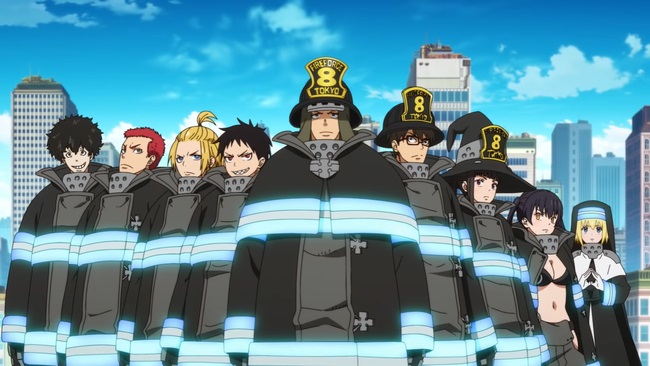 It contains several fire explosions, which makes it an awesome anime. The series has recently gained popularity among shonen fans. It is adapted from Atsushi Ōkubo’s manga of the same name, En’en no Shōbōtai.

This anime series has been a hit since it was released in the summer of 2019 and in its second season in 2020. The second season of Fire Force has ended, and we are here to recommend some anime to watch after that. The list below includes anime like Fire Force (En’en no Shōbōtai).

10. Seraph Of The End: Vampire Reign

In the world, vampires pose similar threats to the infernal’s Fire Force. Yuuichirou Hyakuya, a boy at the Hyakuya Orphanage, is the central character of the anime Seraph of the end: The reign of vampires.

It is his vow to avenge the death of his family by taking revenge on the vampire. A total of twelve episodes were aired in Seraph of the end: The reign of Vampires.

“Seraph of the end” was released during the spring 2015 anime season: “Vampire Reign” is an anime starring a boy vampire. Fire Force shares many similarities with anime, as both are set in a world filled with new causes of death.

Seraph of the end: During the Vampire reign, a mysterious virus spread through the population, killing those over the age of 13.

As Tanjiro searches for a cure for his sister Nezuko, Kimetsu no Yaiba follows his journey. Through his journey, our protagonist Tanjiro learns both about the world around him and about himself. The first season of Demon Slayer aired 26 episodes.

It will be followed by a sequel to the season 2 movie Demons Slayer Movie as well as a series 2 that will air sometime in 2021.

This anime and Fire Force have a dark theme in common, thus sharing similarities. Demon Slayer features bloodthirsty demons, while Fire Force portrays the Infernal as the cause of death. It is both Tanjiro’s and Shinra’s desire to save their people.

Another anime very similar to Fire Force is Attack on Titan. Humans live within a large walled city, which protects them from the humanoids called Titans that eat and enslave them. Titan caused the destruction of Eren Yeager’s hometown and the death of his mother, and Eren vows to eliminate Titan.

Each show follows organizations that protect the public from unknown threats (Scouts: Titans, Fire Force: Infernals). Both protagonists are also battling unnamed threats in their own families, which motivates them to join these organizations in the forefront of fighting against this problem.

Following Fire Force, you can watch Fullmetal Alchemist. In regards to their brothers, Edward and Shinra disagree with each other. The forbidden alchemy caused Edward to lose part of his brother Alphonse.

Shinra Kusakabe of the Fire Force can control fire with his feet, and Edward Elric of the Fullmetal Alchemist Brotherhood uses alchemy as a power.

Both the anime and Fire Force share similar characteristics of their protagonists. The Fire Force’s Shinra Kusakabe and the Blue Exorcist’s Rin Okumura both feel that they have something to prove and something to learn. Each has enmity with their family member and wants to protect others.

The Spring 2011 season saw the release of the boy supernatural anime: Blue Exorcist. There are many action-packed beatdowns in both series. Blue Exorcist portrays the story of Rin and his rush with the demons. He trains to fight his younger brother because he wants to live the way he wants.

Blue Exorcist had 25 episodes in total, and had two seasons. Speculation indicates that a third could arrive in 2021.

A relatively new anime that can be compared to Fire Force is Jujutsu Kaisen. A world full of cursed spirits and sorcerers is a world Yuji is trying to save people from so that they may have a proper death. When they are combusted, humans become zombie-like creatures and Shinra wants to save them as a hero.

Throughout the plot of both anime, deaths appear at every turn. This anime has only one season, featuring 24 episodes. The series premiered in October 2020.

The theme of Bleach is monster-hunting, making it a classic anime. The anime is set in a world where spirits roam around after people die, and some of them grow into cursed creatures called Hollow, which Ichigo and his allies at the Soul Society destroy in order to bring peace back around the world.

3. Kabaneri of the Iron Fortress

Following an attack by aggressive undead creatures named Kabane on their station, a large group of survivors seeks refuge on a train. At a time when the world is experiencing an industrial revolution, there appears a monster whose heart, which is protected by an iron layer, cannot be penetrated.

KOTF’s world is more similar to Fire Force than any of the other anime on the list, since the kabane are just like infernals. The anime’s theme is very dark.

It is based on the manga of Atsushi Ōkubo as well. Because the creator of Soul Eater and Fire Force is the same, you can expect there to be several striking similarities between the two. Several elements of Soul Eater can be found in Fire Force, such as Shinra Kusakabe’s iconic smile and character design.

Fire Force has by far the most similarities to Fairy Tail, which is the story of Lucy and her adventures in a magical world with her friends. Both anime feature action scenes and awesome fights.

Like guilds in fairy tail, fire force companies have captains similar to guild masters. Both groups take part in adventures.

As far as their characters are concerned, Shina Kusakabe and Natsu Dragneel are very similar to one another, and they both have frenemies in the form of Arthur and Grey, respectively.

In Fire Force, the explosions seem to be comparable to Fairy Tail. They totally make me think of Fairy Tail. I highly recommend Fairy Tail to those who liked Fire Force.