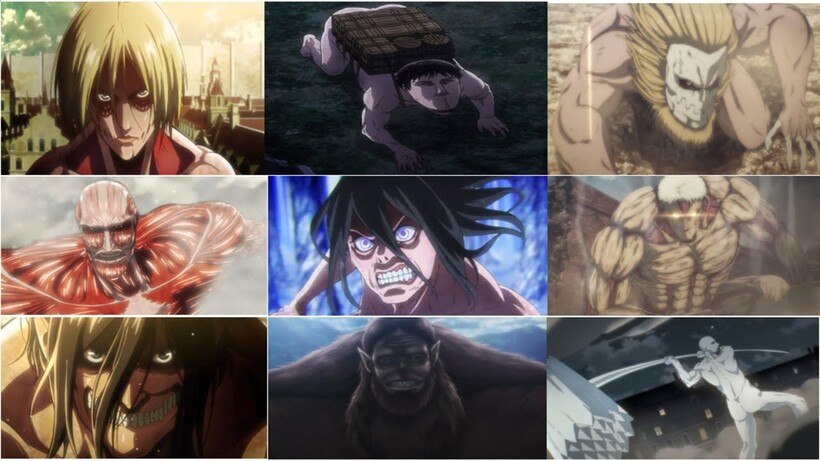 Attack of Titans is an exciting series mainly because of its wide array of characters, especially Titan Shifters. The whole world and its mechanism changed when the original Titan Shifter crossed paths into otherworldly power.

The power was then distributed among 9 Titans who are different from each other.

This list ranks those Titans who proved themselves useful with their powers.

The present leader of the Armoured Titan- Reiner Braun. He is shown as someone who is exceptional at hand-to-hand combat fighter who also trains Eren.

His strength, tactical sense of battle, and rational judgment are all the consequences of his military training.

He was victorious over Eren because of his sheer will and strength. Reiner is able to conceal his true identity through his regeneration abilities and he also possesses an extremely useful skill of transferring his consciousness to survive.

Former heir of the Jaw Titan- Porco Galliard. He was a formidable Eldian Warrior who displayed exceptional speed as the Jaw Titan. A soldier who never gives up and his speed is in sync with his brutal and precise attack techniques.

He has the ability to easily take down Fort Slava with his jaw strength. Furthermore, he has good intellectual and observational abilities.

He was an individual capable of causing mass destruction in his surroundings and even Eren was weak before him.

His main weapon against the Corps was the heat emission of the Titans and was also able to cause blasting transformations.

The preceding inheritor of the Founding Titan was Karl Fritz. The power he possessed as the Founding Titan, he used it to order a huge group of Titans to build a settlement called the Paradise Island. This land was established to save some Eldians.

Karl is the only Fritz member who has the power of the Founding Titan freely. He also used this power to manipulate the Eldians in his Island. The power has always been strong because of his firm will.

The present heir of the Colossus Titan- Armin Arlert. However, the manga doesn’t show Armin in much action but we know that his Titan is responsible for the destruction of the ships.

He is an individual who is highly accomplished and takes well-deliberated decisions and is the strategist of the team. He uses plans and strategies because he knows Titan’s weaknesses and does not want others to take advantage of it.

The only known heir of the Female Titan – Annie Leonhart. She is great at hand-to-hand combat against Eren.

She displays intelligence, outwits Erwin Smith’s plan to capture her. She was the one who caused the massacre of Levi’s Special Operations Squad and this is clear proof of her skills, shrewd judgment.

Considering hand-to-hand combat, he is better than Reiner. With his royal blood, he is able to command Titans of his own. In terms of attacks and intelligence, his is almost unparalleled.

The original Titan, who was slaved for 2000 years and is the possessor of the power which is now shared between nine other titans- Ymir Fritz.

Due to the powers, she carried as an original Titan, she worked on Eldian King Fritz’s orders. She was commanded to build a kingdom for him and to mercilessly destroy his enemies.

Her powers are so extreme that she can build bridges, cultivate the land, collect wealth for the Eldian Empire. Also, she was the one who created the Titan body out of sand!

The previous heiress of the War Hammer Titan – Willy Tybur’s Sister. She established herself as the top Titan Shifter in a short period of time in the series.

Furthermore, she is an amazing fighter with polished skills in both attack and defense. She effortlessly eased Eren’s Attack Titan. Similar to Annie, Willy is also quick on her feet when it comes to judgment in a battle.

The strongest titan and titan shifter in the Attack of Titan series- Eren Yeager. He possesses the powers of Attack Titan, War-Hammer Titan, Ymir’s powers, and Founding Titan.

All these make him the most superior being in the universe of Attack of Titans.

Eren is the holder of some magnificent combat skills and genius manipulative powers. This allows him to outwit some of the best individuals such as Zeke.

His unbreakable determination and will takes him forward and helps him achieve his goals.