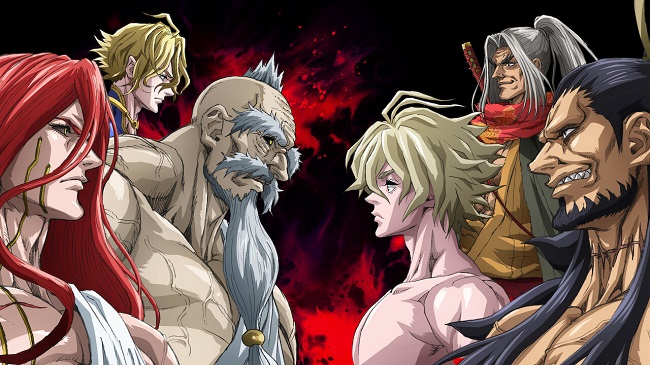 Record of Ragnarok or Shūmatsu no Walküre is an anime covering genres such as Action, Action, Supernatural, Seinen, Drama and Superpower. The following list will be based on the ruthless fighting style and tournaments in the show. Record of Ragnarok is a Japanese manga written by Shinya Umemura and Takumi Fukui and drawn by Ajichika. It began publishing in Monthly Comic Zenon, a Coamix’s seinen manga magazine, in November 2017. An anime television adaptation from Graphinica will premiere in 2021.

As the plot goes, Every 1000 years, God’s Council assembles to discuss the prevalent issues and this meeting, it’s the fate of humankind. This has become an issue since humans have been relentless in abusing the planet and each other and in unanimous favor, gods agree to end humankind as they determine humans to be irredeemable. However, Brunhilda, the oldest and the Leader of the thirteen half gods Valkyrie, proposes to give the humans one last chance to redeem themselves and hold the Ragnarok, a tournament where 13 notable humans from their history and 13 strongest gods will be put against each other in a deathmatch. If the humans manage to come victorious in 7 rounds they get to survive. However, the odds were highly uneven, so to rectify that each human will be granted a valkyrie transformed into a powerful weapon to match the fighter’s style called ‘Volund’ putting her at risk of losing her life if the human dies. It will be very interesting to see gods and humans involve in duels and fight to their greatest potential. It would be fair to satisfy the curiosity now with the list-

5. Fate: The Holy Grail of Wars

Seven servants of past mythical and historical figures are summoned by seven mages to fight each other until one stands till the end, they will be the winner of the Holy Grail. The Holy Grail the mage and the servant one wish each. Each sorcerer has its own goals and the rules are very simple. The world of Fate is filled with great betrayals, sad moments and top-notch battle scenes all with the high-quality animation works as the cherry on top.

The Dragon Ball series came back with the sequel Dragon Ball Super a few years ago. The heroes have reached new levels, the power-ups are divine and new forms are breathtaking, the villains all together bring new life into the franchise. The Tournament of Power comes particularly in the good books as it exceeded the expectations of fans. Goku and Vegeta work really hard to keep the new threats at bay but soon when all hope seems to be lost Goku again gains the trust of his people with his divine new form- Ultra Instinct.

The 21st-century scientists were tasked to warm Mars in order to make it habitable for humankind. They come up with a plan which is cost-efficient and a plan that seems like it will work to make Mars a home for humans. They send cockroaches and molds to the planet’s surface so that the mold would absorb the sunlight and the dead insects to feed on the mold. In the year 2577, the first manned ship is sent to mars to check on the progress instead they are faced with a gigantic mutated cockroach with enormous strength. While the whole crew gets wiped out, transmissions are sent with the information back to earth. From then on, elite warriors are being sent to fight these mutated beings and get mars back.

Baki Hanma is in training with a goal to surpass his father, Yujiro Hanma, a legendary martial arts fighter who has claimed the title of the strongest fighter in the world. Five of the most brutal and violent convicts from death row have descended upon Tokyo to take on Baki. They want to be defeated in their unrivalled strength and have the hope that Baki is the only one who can do it. In his journey, he meets several underground martial artists such as Kaoru Hanayama, Gouki Shibukawa, Retsu Kaioh and Doppo Orochi who come together to fight alongside Baki.

This series can claim that it is the one with the most tournament arcs as it is based on underground battles only. The protagonist, Ohma Tokita is considered to be invincible at first but when confronted with a strong opponent, he crumbles. He struggles with accepting himself and is constantly at war with himself, but as the series progresses, he learns to accept his master’s teachings and comes to peace with himself. The future seasons will be filled with several interesting fights between the strongest of the beasts.