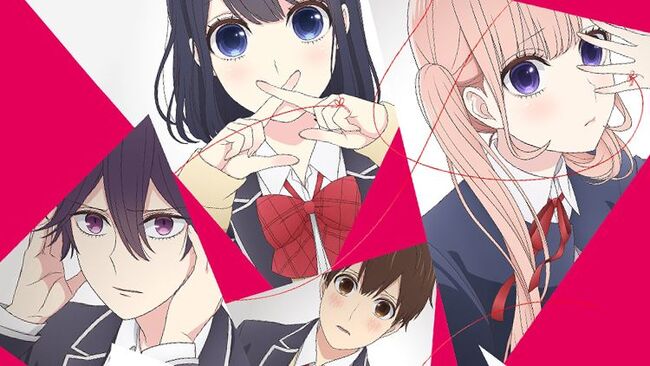 Rent a Girlfriend was like a breath of fresh air for people who were sitting secluded in their rooms because of the covid lockdown. The anime was so entertaining that after finishing the anime, fans weren’t satisfied enough as the first season ended and were wondering if there are other anime that are similar to their beloved Rent a Girlfriend? And to answer the question. Of course, there are

The following list is based on three criteria- the first will be the cuteness of the characters, characters that shine regardless of how bad their situation is, the second criteria being the fake relationships and, last but not the least being a harem, a genre in which the protagonist has several girls who have fallen in love with him. Now, here are five anime that are similar to Rent a Girlfriend.

This anime revolves around the love story of Raku and Ichijou and his fake relationship with Kirisaki and Chitoge. This fake relationship began because of a family condition and this is why this show is on this list. This anime is similar to Rent a Girlfriend in many ways including the way the female characters look, they resemble each other in terms of physical appearance very closely.

Mengo Yokoyari’s Scum’s wish is just Rent a Girlfriend without the comedy. However, before you go watch watching it, you must know that it will break your heart, not in terms of emotional scenes or feelings but how far the characters go to fulfil their desires. Yasuraoka Hanabi and Awaya Mugi form a fake relationship, just to finally have the physical intimacy they have always desired. However, Hanabi is in love with his teacher and cousin brother Narumi and Awaya has always been in love with his former teacher Akane Minagawa. To find a way to fulfil their desire for their crushes, they find an alternative path in which they form a pact to give each other physical pleasure but the one condition being not to fall in love. It can be said that it is the ecchi version of Rent a Girlfriend.

The show is pretty messed up at the core but it is hidden very well by the creators. There are many toxic things normalized in this show which follows the main character, Shinohara Erika, she is just a normal high school girl who wants a boyfriend just like her friends do. Her pride is hurt after she is ridiculed by her classmates for not having a boyfriend, she takes a photo of a random boy on the street to make him the scapegoat. However, things take a turn when the boy turns out to be a guy from her school. To keep her façade going she begs the boy, Sata Kyouya to be her boyfriend. Sata agrees to fulfil her request if she becomes his pet. This anime is similar to Rent a Girlfriend since they need a fake relationship to keep their self-respect in high school.

It is the future and the Japanese Government has implemented a new law in which people are forced to marry their perfect match by the age of 16. The people who oppose this rule have to face severe punishment by the Red Threads of Science Program.

Yukari Nejima is in love with her childhood friend Misaki, however, The Red Threads of Science program assign a random girl names Ririna Sanada as his wife. She tries to help Yukari get Misaki as his wife believing she is his true love. In the process she falls in love with Yukari and the fake relationship doesn’t work out for any character in the show and all of them end up weeping all the time.

Scum’s Wish is the only anime that can match the drama and relationship stigma that is a common theme in both Scum’s Wish and Domestic Na Kanojo. The premise is very similar to Rent a Girlfriend, the character falls in someone he can’t even touch.

The male protagonist of the show forces his sexual desires on his stepsisters, and this is what makes this show very messed up. They pursue fake relationships, but this causes them to fail as human beings. The characters are extremely flawed just like Rent a Girlfriend and they form fake relationships to fill the burning hole in their life.